Join now more exciting and exciting battles than ever in the free game - Cat King right now!
In a forest, Dogs and Cats village are living on the banks of the Peacy River. The more gentle the Cats is, the more aggressive the Dogs is. They created an army armed with weapons, hired bosses from other regions and are attacking the Cats, capturing all the Cats inhabitants as slaves. Faced with the aggression of the enemy, the Cats gathered the elite warriors team to fight, fight off and chase away the evil dogs.
Accompany the cute Cat warriors in Cat King to create a special team of brave Cats to defeat evil dogs and bring peace to the Cats inhabitants.
BATTLE - CHALLENGE
An RPG game for kids, combined with attractive cartoon pet strategy cool game with action fighting and interesting skills. Let's overcome 60+ challenges in easy to difficult mode, perform all the missions with the ultimate skills of the warriors.
SUMMON WARRIORS - SET UP THE TEAM
30+ warriors are waiting for you to summon and upgrade your power in this fun game. Three lines are gladiator, shaman and support. When you combine them together, you can create a multitude of different tactics and the ability to acquire various items. Pick out 3 warriors each level and make each battle bring the attraction, different and fill the bag.
 MONSTERS AND BOSSES
They are the enemies you must defeat in this role-playing game to protect the Cats. They also spread fear into neighboring villages. With 50+ types of monsters and bosses such as dogs, wild boars, snowmen, gorillas, stone people, Egyptian mummies ... each of them has tremendous power, you will be immersed in the epic battles with them.
 MERGING SKILLS - INCREASE STRENGTH
With extremely diverse and unique research and manufacturing system, collect and merge the same skills to create the most powerful skill and the most spectacular move. Don't forget to thoroughly use the skills to enhance the level of warriors in this action game for kids. Great!
PVP - PLAY WITH OTHERS
Combining offline and online fun games, not only are you comfortable to enjoy without a network but you are also able to claim the strength of your Cats army by battling other players. Let's create the best team to quickly stand Top and win many cool rewards. Your tactics and leadership are time to prove it.
Don't wait, take your phone to download the free game about dogs and cats right away and protect the village of Cats by fighting against the army of Dogs in this fun 2D cat game! Simple one-touch play, addictive fast tempo, funny sound. The fun RPG game - Cat King will give you an unforgettable experience. 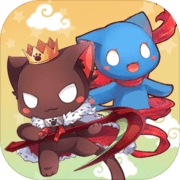