Are you ready to enter Battleworld and join an epic Secret War? Prepare for an all out BRAWL in the Marvel Realm of Champions WORLDWIDE LAUNCH Trailer.Don't miss our WORLD WIDE LAUNCH Trailer premiering tomorrow at 9AM Pacific!

Experience a bold new imagining of the Marvel Universe and uncover the secrets of the mysterious new planet known only as Battleworld. Long ago, Maestro, an evil version of the Hulk from an alternate future, forced shattered realities together to construct his own Battleworld. He ruled over these merged, alternate timelines until he was secretly slain! With his iron grip no longer holding this world together, it has descended even deeper into disarray. Barons have risen to control their lands, looking to turn the tide of war in their favor. As this Secret War begins, it is up to YOU to solve the mysteries of Battleworld and take your true place as a powerful Champion! Customize your ultimate Marvel Champion with weapons and gear, then team up with your network of friends in real-time high-action brawls. Play your part in an epic war of planetary proportions as you rise from a rookie Champion to become a legendary hero of BATTLEWORLD!YOUR CHAMPION. YOUR WAY.*Customize - The only Marvel game where you can become your favorite Champion and customize them to reflect your personality and battle style.*Enhance - Earn gear and upgrades as you brawl through the mayhem. Gear and weapons will add to your Champions’ abilities and strength. The more powerful your Champion becomes, the more successful you will be!*Play the Perfect Role - Tank with your Hulk and soak up hits while you attack hard with area disruption. Bring your Black Panther to inflict devastating damage at close range. Use high-powered ranged attacks with your Web Warrior and Iron Legionnaire. Amplify your allies with your Storm and Sorcerer Supreme and deal bursts of damage to vanquish groups of foes.EXPERIENCE BATTLEWORLD*A New Marvel Universe - Marvel authenticity with a twist! Experience the deep story of Battleworld, full of mystery, intrigue, and ferocious battles with characters from across Marvel history.*Marvel Inspired Battle Arenas - Fight in the barbarian wastelands of the Hulk Gamma Horde, high-tech cityscapes composed of Iron Man’s Stark Tech, and much more! *A Visually Stunning World - Witness awe-inspiring graphics and representations of iconic Marvel characters, battle arenas, and spectacular special moves.EPIC REAL-TIME MULTIPLAYER BRAWLSStrategize with your team to select the right mix of Champions to dominate over the competition in action-packed team battles!*Arena Conquest - Engage in real-time 3v3 team brawls! Takedown the opposing team’s Baron and claim your victory!*Arena Deathmatch - A wild 2v2v2 battle for supremacy, gain points by vanquishing your foes in battle. Use epic power-ups to upgrade your Champion’s abilities and lead your team to victory!*Stronghold - Team up and battle waves of enemies to protect your ISO Core. The difficulty increases as you progress, along with your rewards! *Onslaught - A rotating Strike mode, fight off 15 waves of increasingly difficult enemies that bear down on you and your teammates. YOUR TEAM. YOUR ALLIANCE.Join an Alliance or create your own to forge a community of Champions ready to tackle Battleworld’s challenges! Whether you are looking to round out your Arena Conquest team or the key to your perfect Stronghold defense, Alliances are the best way to find your next teammate. MAKE MARVEL YOURS! Your Champion. Your Team. Your Realm.Join the intense, team-based multiplayer action and put your Champion to the test in action-packed brawls where skill and strategy will earn you a place among LEGENDS! DOWNLOAD MARVEL REALM OF CHAMPIONS NOW!YouTube: www.youtube.com/MarvelRealmofChampions
Facebook: www.facebook.com/MarvelRealmofChampions
Instagram: www.instagram.com/MarvelRealmofChampions
Twitter: www.twitter.com/MarvelRealm
www.playmroc.com TERMS OF SERVICE:
Please read this Terms of Service Agreement and our Privacy Notice before using our services as they govern the relationship between you and Kabam.
www.kabam.com/terms-of-service/
www.kabam.com/privacy-notice/

Become Your Own Superhero

Marvel Contest of Champions US
Marvel

Marvel Contest of Champions US
Marvel 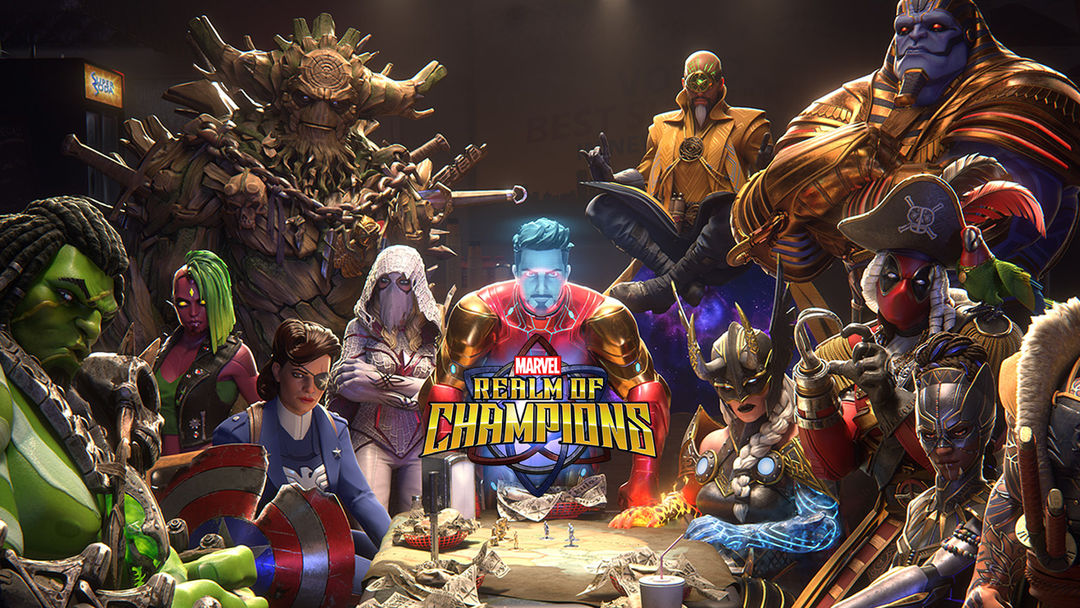