Dear Players:The new Runic Power Mode is available for a new combat experience! Take on the challenge in Power Armor Mode to duke it out on a technological battlefield. Metro Royale's New Chapter has started. Build up Honor to show your strength. Get the Runic Power themed Royale Pass to complete missions with ease.To give everyone a better gaming experience, PUBG MOBILE will be pushing out updates starting from January 12. The server will not be taken offline for this update. This update requires 615 MB of storage space on Android devices. The iOS version requires 1.5 GB. Please note that players on different versions cannot team up with each other, so please update as soon as possible.

New Modes, New ExperiencesRunic Power Gameplay (January 12 to March 7)Runes from another world have brought three special powers with them. Choose the power that suits you, collect Rune fragments, and use them to aid you in your fight to become the final winner on the battlefield. Choose Erangel in map selection to experience this exclusive gameplay mode.

∙ Players will choose their Rune energy type on Spawn Island. You will need to choose to bring either the Flame Rune, Arctic Rune, or Wind Rune into the current match.∙ After selecting a rune, you will get 2 skills. The first skill summons an object, and the second skill gives you a boost. Using these skills consumes Rune energy.∙ Rune energy can be obtained in matches.点击链接观看视频∙ Rune Abilities◦ Flame Rune:Summon skill - Summons a wheel of flame that rolls forward slowly, dealing burn damage to enemy players it touches.Boost skill - Adds a burning effect to your Ammo for a short time.◦ Arctic Rune:Summon skill - Summons an ice wall. Each block of the ice wall can be destroyed separately. When the ice wall appears, it will lift up players or vehicles directly above them.Boost skill - Adds a freezing effect to Ammo for a short time. Freezing reduces the effectiveness of healing.◦ Wind Rune:Summon skill - Summons a semi-transparent shield of wind that reduces the damage of bullets shot from outside the shield.Boost skill - Increases your movement and reload speed.New Firearms, New OptionsFAMAS ∙ A new assault rifle that uses 5.56mm Ammo. It can be loaded with 25 rounds, has the fastest Rate of Fire among rifles, and is outstanding in close range firefights.∙ The FAMAS can be equipped with a Muzzle (Rifles), Scope, and Mag (Rifles). There is no foregrip, but it comes with its own bipod that reduces recoil when shooting with it in a prone position.∙ Only appears in the Livik Classic Battle Royale map.

Power Armor Mode (Launches in EvoGround on February 5)New high-tech Power Armor has been created on Livik. To create your own set of   Power Armor you must  bringing Nano Crystals and an Armor Blueprint to the Matrix Base. You will have 2 additional chances to respawn yourself or your teammates during a match. Matrix Events will also be available for you to participate in during each match.
∙ Respawn◦ Teammates can be respawned at research stations. All players can respawn twice. You can choose to respawn yourself or your teammates during a match. Players respawn with basic equipment.∙ Power Armor◦ Power Armor Chest Piece: Reduces chest damage and increases backpack capacity.
◦ Power Armor Arm Piece: Reduces arm damage and increases melee damage.
◦ Power Armor Leg Piece: Reduces leg damage and fall damage. Gives a quick dash ability.
◦ Assembling the full Power Armor set unlocks its ultimate weapon, the Dragon's Breath Grenade.∙ Matrix Events
◦ Matrix Event 1: Improved regional supply output.
◦ Matrix Event 2: Multiple Matrix airdrops and significantly increased supplies in each airdrop.
◦ Matrix Event 3: Life Detectors in research stations are activated and can be used to detect surrounding players.

◦ Metro Royale: Honor will be available after the game is updated. In keeping with our Season tradition, at the start of a new chapter your rankings and inventory in Metro Royale will be reset. Fame and NPC Favorability, however, will be retained.◦ New rewards will be available in the latest chapter. Accumulate Honor to get voice packs, outfits, and other permanent rewards!◦ Added new weekly rankings, including Loot and Elimination Rankings.◦ Improved enemy AI from Steel Front and the Cobras to make them more intelligent and challenging.∙  New Metro Royale Honor System 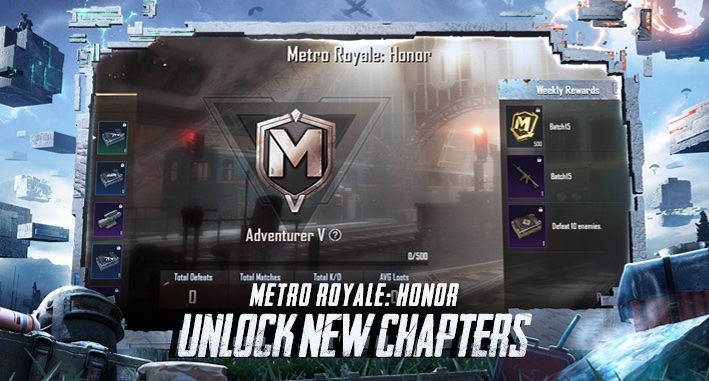 Your Honor represents your strength in Metro Royale Mode. Accumulate Honor to get voice packs, outfits, and other permanent rewards.Honor is obtained by defeating players or picking up Honor items. A player's Honor level increases when a player reaches the maximum amount of Honor. Honor can also be obtained by completing weekly missions.Honor is reset whenever a chapter is updated. Players will start with an initial amount of Honor based on their performance in the previous chapter.∙ New Solo Mode◦ In Metro Royale Mode, all maps and modes support Solo.◦ Solo players won't encounter players who play as a team.∙ Metro Royale Improvements◦ Mail can be read in the Metro Royale Lobby.◦ Removed the NPC chat feature.◦ Missions do not award any more Fame after your Fame reaches the max level.◦ Missions do not award any more Favorability after your NPC Favorability has reached the max.Other New Season ContentRoyale Pass Season 17: RUNIC POWER (January 19 to March 21) RUNIC POWER themed interface and rewards: Spin the Wheel of Fate to obtain upgraded rank rewards! Choose between Resplendent Dawn and Deadly Sickle at rank 50, and reach rank 100 to get the majestic Guardian Armor Set and the new themed UZI and M16A4!RP missions have been overhauled to lower the difficulty while increasing the point rewards! Added season match time rewards. Accumulate match time to collect point rewards. Added RP point rewards to weekly Activity progress. Complete missions to accumulate Activity and collect point rewards.RP Activity Pack event: Purchase Activity Packs to rank up your RP quickly, and collect Mission Activity Points to convert them all into UC refunds. Purchase the RP Activity Pack to immediately get RP Points of equivalent value and extra crate coupons. You will also activate the Mission Activity Point rebate, and the Mission Activity Points you collect can be converted into UC refunds.The adventure event is back with the RUNIC POWER theme: Go to the RP exclusive event tab and obtain Metro Badges to go on an adventure like no other. Unlock the story as you explore and choose to advance for free or after making a purchase. Collect exclusive supplies to redeem 1 of 2 sets, exclusive vehicles, and other grand rewards.  Improved the selection between UC and AG: It is now only necessary to choose this once per season, and you can change your mind at any time. Adjusted the pace at which currency is returned to players via rank rewards to increase the amount given at lower ranks. 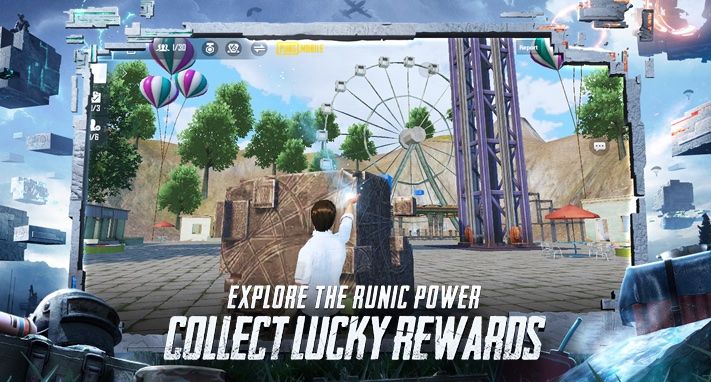 1. Runes have appeared in Cheer Park, bringing a magical power with them. Players can sense rune energy once per day in Cheer Park to collect free rewards from a rune.2. After claiming the reward, players can use the power of the Runes to search for and match with other players. Players can then become Rune friends for the day. You can only become Rune friends for one day and can rematch with another player once per day.3. Players can complete specified Rune missions with their Rune friend in Cheer Park to collect great rewards.4. When this theme is available, a pier leading to Cheer Park Island will appear. There you'll find a giant bunny doll waiting for you.5. Players can project Valentine's Day notes in the air for all to see! The projection will have the sender and receivers' names on it.Dream Team Theme (Feb 9 to Mar 7) Subscription Festival (January 13 to January 27) Subscribe to Prime (or Prime Plus) and RP Prime (or RP Prime Plus) at the same time to get exclusive discounts from the BP Shop and RP Redemption Store, daily login gifts, exclusive BP redemption items, and other great perks. During the event, many subscription packs will be sold at a discount for a limited time. Players who subscribe for the first time will even get an additional 20% discount.For more game performance and improvements, you can visit here.

when we get new update

my pubg mobile not working why

PUBG Mobile Lite Winner Pass 26 is going to be wild!

【Discussion】Tell Marvin your favorite Legend and why

Legends assemble here: https://discord.gg/JUwhP65HTB Hello Friends, This is Marvin. As we know, Apex Legends Mobile is a game where players choose from a selection of different legends. Each of these

The next update in PUBG Mobile(KR) will feature a high-tech theme mode. This update introduces a new firearm called MG3. In addition, you will be able to throw medicine to your teammate!This update is