Source: League of Legends Wild RiftOur first patch of 2021 is here with some exciting changes, including a band(le) of new champions! We’re introducing some of Bandle City’s finest to the Rift: Corki, Kennen, Tristana, Lulu, and of course, Teemo. You can follow them on their adventures during our newest event, Yordle Expedition. We’ve also added some handy features like the Party Finder, a new latency indicator, and a slew of other gameplay improvements.Finally, get ready to kick off the first official ranked season of Wild Rift and climb to Gold for a brand new reward: Glorious Tryndamere.Say hello to the new year and Patch 2.0! 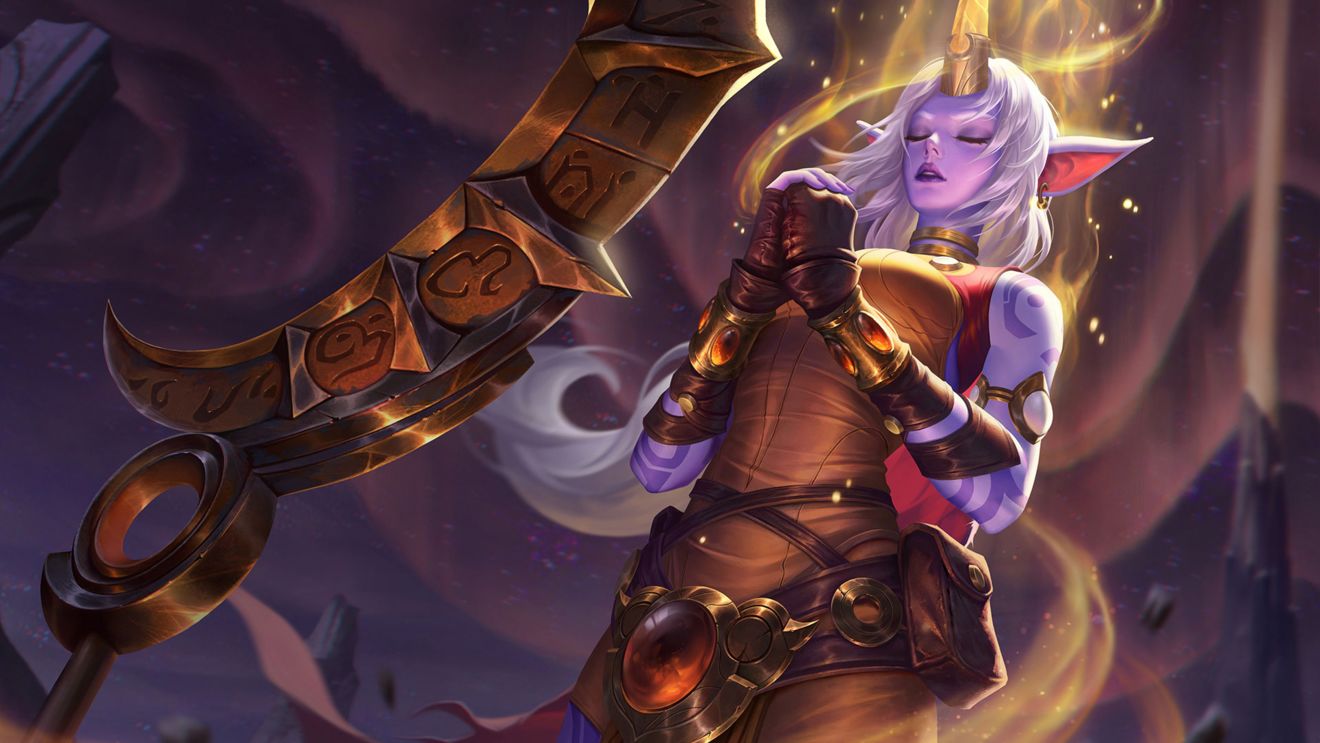 NEWCHAMPIONSCORKI, THE DARING BOMBARDIERDon’t be fooled by appearances because Corki is much more than just a magnificent mustache. Enamored with all things aircraft, the Daring Bombardier often ventures beyond Bandle City in pursuit of aerospace innovation found only in the inventive city of Piltover. He keeps a watchful eye on the sky for enemy bogies as the head of the Screaming Yipsnakes.KENNEN, THE HEART OF THE TEMPESTIn the space between a lightning flash and a thunderboom, one yordle stands as the most senior member of the Kinkou Order. Dedicated to preserving the sacred balance that surges through Ionia, Kennen uses his centuries of knowledge to protect the world he’s come to love. But as the Heart of the Tempest, he also possesses the devastating power of the storm—and he’s not afraid to use it.TRISTANA, THE YORDLE GUNNERThe inhabitants of Bandle City are curious by nature, but few are lured by the promise of adventure in Runeterra quite like Tristana. Inspired by tales of epic battles and brave fighters, Tristana knew she was destined for a life of explosive action (often literally). With plenty of firepower in tow thanks to her trusty cannon Boomer, the Yordle Gunner seeks to become the stuff of legends.LULU, THE FAE SORCERESSReality is what you make of it—or at least what Lulu makes of it! The Fae Sorceress shapes the world to her whim as she travels Runeterra with her fairy friend, Pix. Through her magic, Lulu enchants and fantastifies everything around her, sometimes with disastrous, if well-meaning, consequences.TEEMO, THE SWIFT SCOUTNever underestimate the power of the Scout’s code! Any who make that mistake (and many who don’t) must contend with Teemo, one of Bandle City’s most formidable protectors. Though small in stature, the Swift Scout does not shrink in the face of big danger. Instead, he travels the world with boundless optimism and courage, seeking to earn every merit badge (and causing a little bit of mayhem on the way).FEATURESPARTY FINDERTired of carrying solo? Party Finder makes it easier for players to get into premade games. Party owners can make their lobbies available to their Friends list or to the public (look in the top right corner of the lobby screen), and players can search for open lobbies to join (look in the bottom left corner of the homescreen). You can filter your search by lobby type, and Party Finder will recommend eligible groups based on your social connections and game preferences. Time to queue up!LATENCY INDICATORSNo more latency indicator on the homepage! Turns out, it wasn’t accurate in showing the latency a player would actually experience in their games. So we’ve replaced it with a network indicator to show what kind of network you’re on (WiFi, 4G, etc.), plus a new in-game indicator of your actual ping during gameplay.SOCIAL SHARINGPlayers can now save the end-of-game scoreboard, end-of-game personal performance, career most played champ, season rank, win streak, new champ acquired, new skin acquired, and leaderboard screens to their device camera roll or share straight to Facebook. Perfect for flexing after a 15/0 Zed game.MAP DESCRIPTIONIf you want to get more familiar with the lay of the land (when you’re not trying to also farm minions and watch out for the enemy jungler), you can now explore the Wild Rift map in detail. Read up on jungle monsters, epic monsters, plants, and structures at your leisure.TUTORIAL OPTIMIZATIONPerformance-improving tutorials can now be prompted based on a player’s gameplay. We also made some visual updates to the tutorial and first champion unlock screen.CHAMPION MASTERY EMOTESThe ultimate flex: Champion Mastery Emotes. Players can unlock a Champion Mastery Emote by reaching Mastery Level 5 with that champ. They can then equip and use it like any other in-game emote to “communicate.”SKINS∙ Sad Robot Amumu
∙ Urfrider Corki
∙ Arcade Corki
∙ Star Guardian Janna
∙ Star Guardian Jinx
∙ Arctic Ops Kennen
∙ Star Guardian Lulu
∙ Dragon Trainer Lulu
∙ Star Guardian Lux
∙ Cottontail Teemo
∙ Guerilla Tristana
∙ Arclight Varus
∙ Little Devil Teemo
∙ Little Demon Tristana
∙ Wicked Lulu
∙ Super Kennen
∙ Star Guardian EzrealFREE-TO-PLAY CHAMPION ROTATION 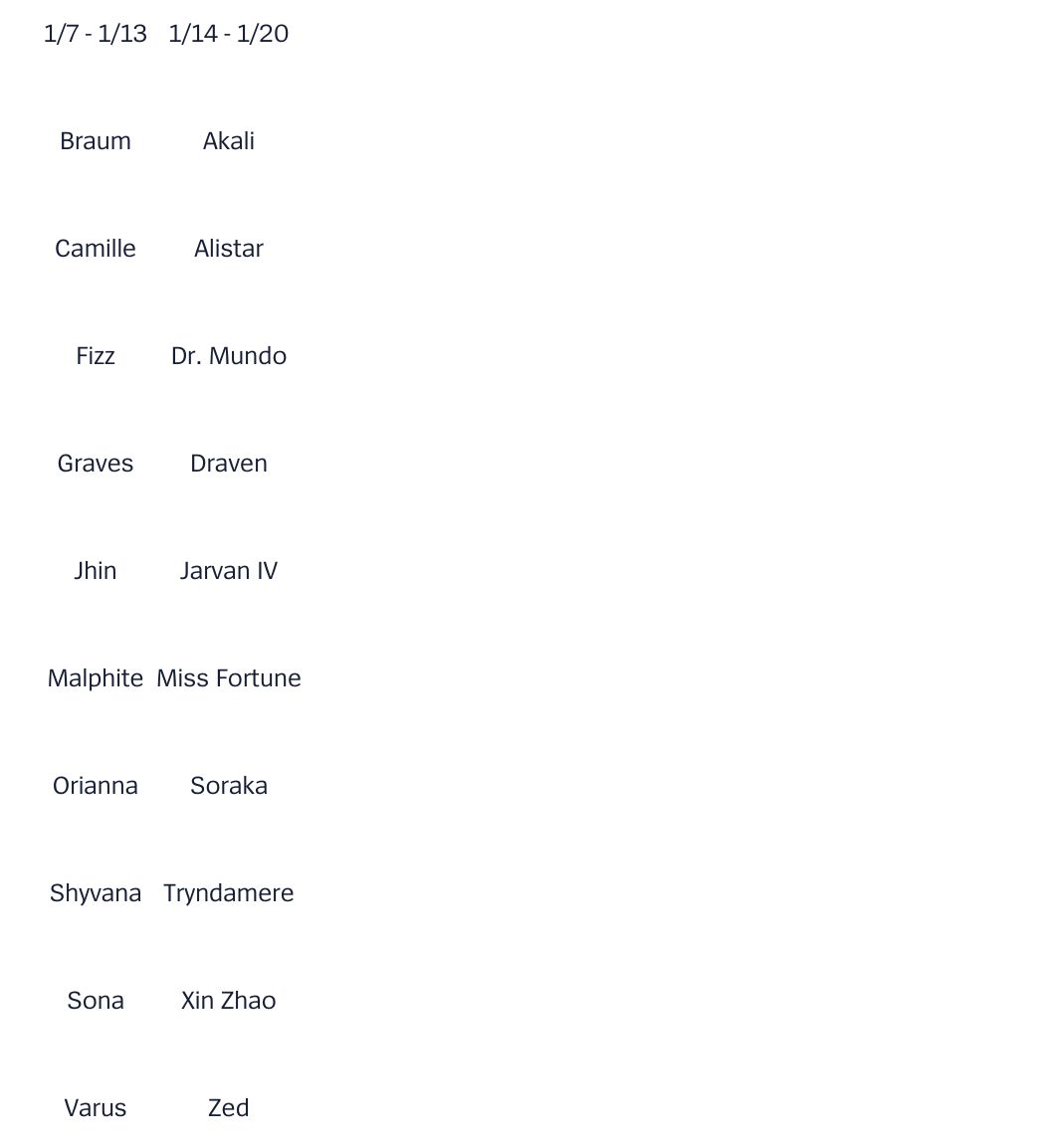 GAME SYSTEMSPING REPLIESNow you can let your teammates know you heard them with ping replies.DRAGON/BARON RESPAWN TIMERSSpawn timers for epic monsters (Dragon and Baron Nashor) now display on the scoreboard. We’ve also made some minimap UI improvements.SCOREBOARD LOGICNo screen peeking! Enemy information on the scoreboard now updates only after players gain vision of enemies instead of in constant real-time.NEW EMOTES WHEELYou can now open the emotes wheel by holding down on your champ instead of clicking into the communications panel.SYSTEM MESSAGE UISystem messages no longer block players’ view of their own champion (i.e. failed surrender vote messages won’t obstruct vision during gameplay). Phew!DETAILED STATSIn the stats tab of the scoreboard, players can now see a more detailed breakdown of key stats, including exactly how much damage reduction (in percentage) their armor and magic resistance items provide, as well as the conversion from ability haste to cooldown reduction.TOWER PRIORITIZATIONTowers now prioritize targeting super minions over siege minions. Gotta take down those supers first.SEASON 1 STARTThe first official ranked season of Wild Rift starts 8 January 2021! Which also means Season 0 ends soon. Players who participated in Season 0 will receive ranked rewards after the season ends (a participation icon for everyone and a player emblem for those who hit Gold and above). There will be a soft rank reset for Season 1, and Ranked mode will be unavailable for 3-4 hours while we transition between seasons.
We also have our first Glorious skin, Glorious Tryndamere, up for grabs for those who make it to Gold as well. They never stood a chance!EVENTSWe’ve added a whole bunch of stuff to League of Legends: Wild Rift, but it still feels like something is missing. Or someone? Perhaps this little someone (or someones) has been 'missing' on purpose, hiding in plain sight beneath homespun glamours or tucked away in a secret city.But these someones, with their unfailing curiosity, can no longer resist Wild Rift's call of adventure. Now they’re sprouting up like mushrooms across Runeterra's greatest cities, bringing with them playful energy (and trouble) that can be electric, explosive, and even...purple?Join us as we search high and low, leaving no Krug unturned in our quest to find Wild Rift's latest champions. Pack your bag, polish your boots, and prepare your map for the great Yordle Expedition!OTHER NOTES∙ We’ve continued (and WILL continue) to tune the matchmaking system for better game quality and ranked experience.∙ The Leaderboard now updates every 10-15 minutes rather than every 24 hours.∙ We’ve made a few improvements to chat including better visual presentation for premade voice chat, improved Friends list filters, and some UX changes for social interactions.

dude release in india and sl already. we r Asia and sea

Not able to find matches in this new update. Please explain, also there's no new champ,can somebody please explain what's going on?

Release it in north America!!!

Is it will reset our acount or not?

Translate
Deimosgamingph : Not, they'll give bunch rewards for season 0
HmmYEAH : so is it will reset acount soon as rumour after all region open?
2 1
Vadim Selyutin
20#

Still no banning phase in MM?

Translate
RPGM : not enough champions for that, they already explained that
Hersenloos : oh i see, thx for the info man
2
Luiz Fernando
17#

PUBG Mobile Lite Winner Pass 26 is going to be wild!

【Discussion】Tell Marvin your favorite Legend and why

Legends assemble here: https://discord.gg/JUwhP65HTB Hello Friends, This is Marvin. As we know, Apex Legends Mobile is a game where players choose from a selection of different legends. Each of these

The next update in PUBG Mobile(KR) will feature a high-tech theme mode. This update introduces a new firearm called MG3. In addition, you will be able to throw medicine to your teammate!This update is